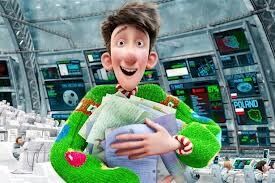 Arthur Claus is the second born son of Malcolm and Margaret Claus, the younger brother of Steve, and the grandson of Grandsanta. he is so silly when he sang a funny goofy song to the lions fall asleep they woke them up in being

scared of them roaring chasing arthur and his grandfather

He made good friends with Bryony Shelfley.

He's the main protagonist of Arthur Christmas. He is voiced by James McAvoy.

He was transferred from Maintenance to the Letters department, after causing a flood at the North Pole.

Arthur Claus is the first Sony Pictures Animation character to be a male protagonist, followed by Gene Meh from The Emoji Movie.

Add a photo to this gallery
Retrieved from "https://arthur-christmas.fandom.com/wiki/Arthur_Claus?oldid=4172"
Community content is available under CC-BY-SA unless otherwise noted.